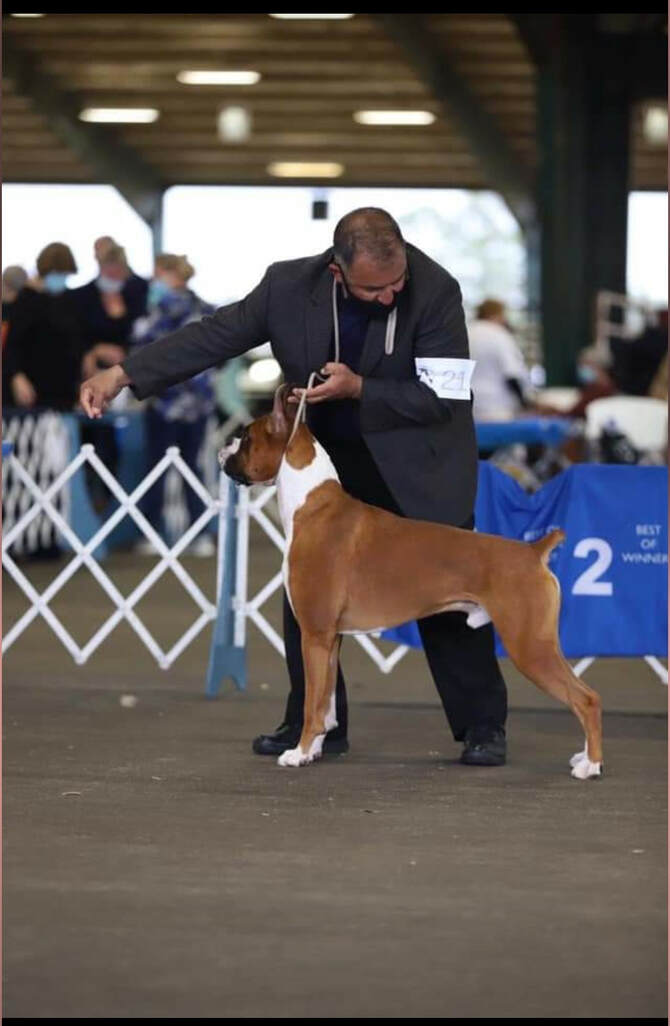 As of this Thomas is the result of a decades long breeding program focused on longevity, vitality, conformation, health and temperament.  As he has been growing up, I can't help but pinch myself.  I often say to friends that he may be the best dog ever born in our nursery.  Thomas is very young as we write this.  Yet he has proven himself exceptionally sweet tempered, biddable, and has a structure to die for.  He is growing into a pretty big dog, around 65 pounds at this age.  We think he will be around 80# at maturity, but time will tell.  He is tall, but square.

He came out into the shows with a bang, winning his first 2 points before the shows shut down due to the worldwide pandemic.  We had him entered in the American Boxer Club Futurity, but that was cancelled.  He finished his championship with three back to back majors in supported specialty shows with extremely limited showing.  We are especially proud of the 5 pt major won under American Boxer Club Judge Sharon Steckler at the Houston Boxer Club Specialty out of the American Bred class.

Meanwhile, he has his Canine Good Citizen and Trick Dog Titles, trained by KPA certified trainer Katie Midkiff, owner of Southern Paws Training in Crosby, TX.  He has earned his trick dog novice title and is working towards his intermediate and advanced titles, along with Dock Diving, agility and possibly other performance events.  He has shown a real interest in everything offered to him.  He's such a joy to be around.

He also has a large working vocabulary of words using a system of word buttons based on augmentative and alternative communication (AAC device) which are used in speech therapy to help non-verbal people to communicate. Thomas is participating in some incredible research (theycantalk.org) where humans teach learners to communicate using sound board Augmentative and Alternative Communication (AAC) Devices. The method we use is audio recordable buttons in a specific layout which is known as the 'Fitzgerald Key,' used to teach those with hearing disabilities in three-quarters of the schools in the United States. Edith Mansfield Fitzgerald (1877-1940) was a deaf American woman who invented this system for the deaf to learn proper placement of words in the construction of sentences. Katie believes that dogs, if given the tools, can break through the glass ceiling we put over them. "They can communicate their thoughts, needs, and feelings if we only allow them to. If we can teach them words to communicate, we can unlock their potential to be so much more than 'just a dog' especially in everyone else's eyes." As of this writing, Thomas has 17 buttons, but his favorites are "frisbee," "I love you," and "outside." We just introduced "cuddle" and that one is definitely going to be a favorite!

We expect that he will improve so many areas of our breeding program, including structure, longevity, and bite. His soulful eyes absolutely melt you; we hope to see that passed along as well.

Thomas is a second generation naturally reared boxer on his dam's side.  His sire is raw fed, minimally vaccinated and has proven himself in all areas of conformation, and performance.