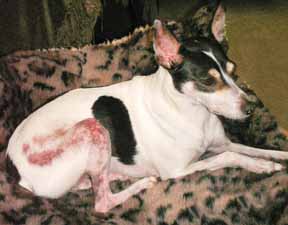 I’m often asked if I think it’s a good idea for a dog to be given a homeopathic remedy prior to being vaccinated, with the intent of preventing any kind of reaction. Personally, I believe it’s difficult to know what remedy might be effective in this regard, unless:

a)    A constitutional remedy has already been established for that particular dog, i.e. has proven to help with ongoing symptoms the dog has exhibited in the past. In this case, it can be a good idea to give that specific remedy a day or two before the vaccine in order to boost the dog’s immune system overall.

b)   The dog has reacted to a vaccine in the past. In this case, I would be inclined to give the dog the remedy that normally would be used to that specific reaction before the vaccine is given.

Many people automatically give the remedy Thuja after a vaccination, but it’s not the only remedy indicated for vaccine reactions. Silica is also a very important remedy in this regard. However, it’s important to remember that treating a reaction to vaccines is no different from treating anything else with homeopathy – the best remedy to give is the one that matches the symptom picture the dog is displaying.

Taking etiology into account (i.e. the factors which predispose the dog toward a certain disorder) is always a part of proper casetaking. If we look up Generals, vaccination after in the Complete Repertory, 41 remedies are listed. Looking at the most prominent of these, and disregarding those that are more specific to vaccines that are NOT received by dogs – like smallpox – we are left with: Ant Tart, Apis, Arsenicum,Belladonna, Malandrinum, Medorrhinum, Merc Sol, Mezereum, Psorinum, Silica, Sulphur, Thuja,Tuberculinum. So, as you can see, it’s not exactly a cut and dried choice based on etiology alone. The choice of remedy should be based on the symptom picture, which can manifest anywhere between several hours and several months  – or even several years – after vaccination.

That said, the vaccine reactions that dogs commonly experience often indicate Thuja or Silica. Some of these symptoms include:

·         Extremities, swelling general, upper limbs, vaccination after: Silica, Sulphur, Thuja (in dogs, this generally corresponds to a lump at the injection site)

When treating reactions to a rabies vaccine, Belladonna and Lyssin (also known as Hydrophobinum) should be considered. Belladonna can be indicated if the dog suddenly develops a high fever, especially if he/she has glassy eyes with dilated pupils. This is also a remedy to consider if the dog develops aggressive or compulsive behaviour (e.g. turning in circles repeatedly), or seizure activity.

Lyssin (also known as Hydrophobinum) is the first remedy to think of if the dog develops a fear of water (which can manifest as refusing to drink) or is agitated by the sound of running water.

It may be a good idea to have Apis on hand, in case the dog exhibits facial swelling, or if there is any other indication that the dog is having an allergic reaction to the vaccine (e.g. swelling of the airways that impedes breathing).

Never be in hurry to leave the vet after your dog has been given a vaccine, as a severe reaction requiring emergency medical attention is always a possibility.


About the author
Anna Borenstein

Classical Homeopath Anna Borenstein owns Homeopathy For All in Southern Ontario. Her practice consists of both people and pets.