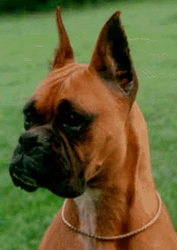 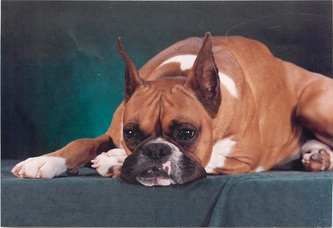 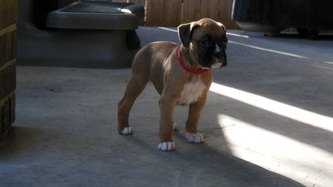 What is the difference between a genetically "Plain or Classic" boxer, a white boxer, and a "Flashy" boxer?

First, it is important to understand how white is inherited in boxers.  This is an excellent treates on the inheritance of white in boxers.  Please read this first:
White Markings and White Boxers
There is an interesting theory by Dr. Garton that inheritance of white in show boxer populations may be different from that in pet populations.  It is understood that breeding a genetically white boxer to a genetically classic or plain boxer will produce only 100% flashy puppies.  Although breeding of white boxers is not allowed in the American Boxer Club Code of Ethics at this point in time, it has occasionally been done.  There have been exceptions to this rule in pet populations, however.  Please read this for more information:
White in Pet vs. Show Populations

More information on the genetics of coat color inheritance in boxers:

Brindle is a dominant color in boxers.  Fawn is a recessive color. This means that if you breed fawn to fawn, you get 100% fawn puppies. If you breed Brindle, you need to know the genotype of that dog - does he/she have a fawn allele to contribute to a breeding?  If the Brindle dog has a fawn parent, the answer is automatically YES.  If the Brindle dog has a Brindle parent, you need to breed them to a fawn dog to find out what their genotype is.  There is no gene test for coat color at this time.

If you wish to review the simple genetics that are understood about coat color inheritance such as fawn vs. brindle, this is an excellent page that shows dominance vs. recessive alleles in coat colors:
Newcastle Boxers on Coat Color Inheritance