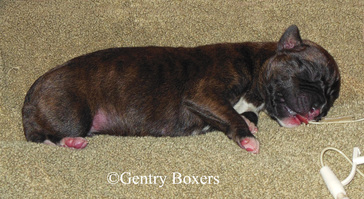 This page is a resource for breeders who are working with "fading puppies" or those needing resucitation or extra help during or after birth.  Many breeders have contributed to the information on this page.

Why does this happen?During the first two weeks of life, puppies are very vulnerable to illness and environmental stress since they are unable to regulate their body temperature independently. Very young puppies also have poor ability to regulate fluid and energy balance. In addition, their immune systems aren't fully functioning and they have limited protection from infections. This makes puppies susceptible to dying from a variety of causes.

What are the clinical signs of fading puppy syndrome?The clinical signs are vague and insidious. It is often too late to save a puppy once clinical signs are apparent. The common findings are a low birth weight or failure to gain weight at the same rate as their siblings (the "runt" of the litter), decreased activity and inability to suckle. These puppies have a tendency to remain separate from the mother and the rest of the litter. They are often reported to cry weakly in a high-pitched tone. Some people refer to this as "seagulling" due to its similarity to the cry of seagulls. These puppies often quickly progress to severe lethargy, loss of muscle tone and death.

One or more of these factors can contribute to fading puppy syndrome. For example, a lack of mothering instinct coupled with poor hygiene can often result in neonatal septicemia (systemic infection) in a very short time. Although some maternal immunity is conferred to the puppy while it is developing in the mother's uterus, the majority of this immunity is acquired via the colostrum or "first milk." If the puppy does not drink an adequate amount of this first milk, it is more vulnerable to infection. It is important that the mother be examined immediately after giving birth for abnormal teat (breast) discharge, mastitis (breast infection), metritis (uterine infection) or other illness.

Many common bacteria can cause overwhelming septicemia and death in a vulnerable puppy in a very short amount of time. Because of the weakness and poor immune response, death often occurs quickly and with few, if any, clinical signs. Viral infections can cause fading puppy syndrome. If the mother is carrying a virus or isn't properly vaccinated, the puppies are more likely to contract an infection from the mother or have an even weaker immune system. Canine parvovirus, adenovirus and canine distemper have all been implicated as causes of fading puppy syndrome.

Intestinal parasites (especially hookworms), fleas and ticks can also weaken a puppy by taking vital blood and nutrients away from the developing puppy. Infested puppies often fail to gain weight and slowly "fade" and die.

What can be done to treat fading puppy syndrome?It is important to ensure that the puppy receives adequate fluid and is kept warm.  Thousands of breeders have found that use of a homeopathic solution called Fading Puppy Remedy prior to seeing symptoms and especially if symptoms occur appears to dramatically lower the incidence of Fading Puppy Syndrome.

"Puppies should not be allowed to become chilled."Puppies should not be allowed to become chilled. During the first four days of life the environmental temperature where the puppies are kept should be maintained at 85 -90°F (29.5-32°C). The temperature may then be gradually decreased to approximately 80°F (26.7°C) by the seventh to tenth day. It is not necessary to heat the whole room to these temperatures. Heating over the whelping box with the aid of a heat lamp is usually all that is necessary.

If bacterial septicemia develops, antibiotics may benefit the puppy, but strict hygiene and good management procedures are also critical. Your veterinarian will discuss proper care and cleaning of the puppies and their environment.

If you are at all worried that you may have a sick puppy, do not hesitate to contact your veterinarian. If you have a puppy that dies, a necropsy (autopsy) should be performed to determine the cause of death. This may help you prevent other puppies from dying from the same cause.

This client information sheet is based on material written by: Ernest Ward, DVM

As a natural rearing breeder, I have worked hard to improve the supports that I use to support our Gentry babies at the start of their lives.  I believe that extreme immune supports are needed to help our babies who are born into what is currently a very toxic world.  We know that human babies are born with hundreds of toxic chemicals in their umbilical cords even before they take their first drink of breast milk.  I would imagine that animals have even more.  Being close to the ground, running around in areas that have overspray of yard chemicals, RoundUp, insecticides, toxic house cleaners, and personal care products - dogs are more likely to be born with a toxic load of chemicals and possibly even epigenetic damage before they even draw their first breath.

With that in mind, I have designed a formula that I keep in my freezer to use with newborns, puppies who are struggling, and even with adults following surgeries or traumatic injury.  We have used this formula very successfully with many client dogs who are sick and need an extra boost of immunity.  The immune system is very much like an army with a finite number of soldiers.  When those soldiers are off fighting on one front (such as with the newborn's load of toxins), a pathogen has a better chance of getting the upper hand, causing illness or even death of the host animal.

This formula has evolved over time.  I keep the recipe updated at this link.  Feel free to make this recipe and share it with other breeders.  Please do not alter it, as the ingredients have been carefully selected using my training in carnivore nutrition, naturopathy and with applied kinesiology.

Gurgly/gasping puppy:  First, have oxygen at hand.  I have a tank and can put a puppy on O2. Don't turn it up really high; about 3 is good.   If they are gasping, at least they are gasping oxygen and their brains aren’t starving for it.  I found something even better than slinging them head down in a towel, and it's safer.  It’s an old Indian method.  Put the puppy over your head, nose down and put her head/nose in your mouth. Gently suck out any fluids that still remain. I know, it’s gross, but you can save a puppy doing this.  Spit out anything that comes out.  You'll need a breath mint afterwards, but it works.

Hydration:  Be certain that your puppy is hydrated.  Mom only has colostrum at first and it doesn't hurt to give a few bottles of raw goat milk (or Immunity Formula) during the first several days.  You can tell if they're hydrated by pulling up the skin on the back of the neck. If it flows back easily, your puppy is hydrated.  If it stays up and seems "dry", they are not hydrated and need fluids.  You can also tube feed and give subcutaneous fluids.  Fresh frozen plasma should be on hand in your Kit (actually in the freezer).  It's a substitute for colostrum containing absorbable antibodies.  It can be given orally for the first 24 hours and subcutaneously after that.  You can buy it from www.hemopet.org -  http://www.hemopet.org/blood-bank/canine-fresh-frozen-plasma.html

There are lots of great books and resources available below to learn more about how to prepare for critical puppy care, if it is ever needed.  In my experience, I haven't needed to provide a lot of ICU care for puppies, but when I do, I'm really glad that I have read the books and have the equipment to save my babies.  One of my favorite writers is Myra Savant Harris R.N., a pediatric nurse and dog breeder who wrote some of the best books on breeding and saving puppies in my own library.  She offers a Newborn Puppy Rescue Kit and has written several books that I feel are "must haves" in any breeder's library.

Contibuted by Susan Patterson, a home-recipe for Pedialyte substitute:

Video of a successful resucitation of a puppy born 17 hours after previous puppy.  He was born without a placenta or cord attached, cold and grey.

Video demonstration of how to bottle feed an infant puppy raw goat milk: