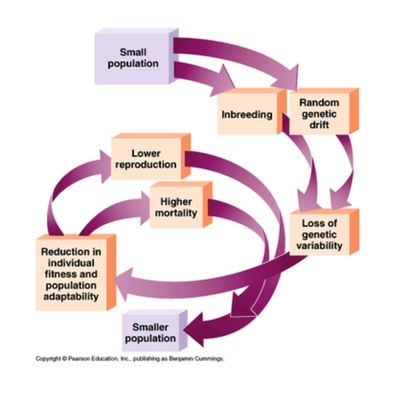 The Institute of Canine Biology COI FAQS: Understanding the Coefficient of Inbreeding
6/4/2015

You probably see references to the coefficient of inbreeding (COI) often, but do you understand what it means? Here are the answers to some frequently asked questions.

What is the coefficient of inbreeding?
In the early 1900s, animal breeders knew that breeding related animals produced more consistent, predictable traits in the offspring, but they also found that there was some loss in vitality and vigor. Fertility was lower, offspring were smaller, early mortality was higher, lifespan was shorter - things that reduced their profit and the quality of their animals, and the higher the level of inbreeding, the greater the detrimental effects. Both the benefits and the risks of inbreeding are a consequence of homozygosity (see below). So a statistic was devised that estimated the level of inbreeding that would result from a particular cross so breeders had a quantitative way of evaluating both the risks and benefits.

What is a "good" value for COI? What COI is "too high"?
The original purpose of the coefficient of inbreeding was to give breeders a number that would indicate both the amount of benefit to be gained from inbreeding as well as the magnitude of the deleterious effects they could expect. The trick for the breeder then is to weight the benefits and risks of a particular breeding and judge what is an acceptable balance. A low COI will have low risk, but it will also only have a modest benefit. A high COI would produce more consistency and prepotency in the offspring, but there will also be a significant loss of vigor and health.

The deleterious effects of inbreeding begin to become evident at a COI of about 5%. At a COI of 10%, there is significant loss of vitality in the offspring as well as an increase in the expression of deleterious recessive mutations. The combined effects of these make 10% the threshold of the "extinction vortex" - the level of inbreeding at which smaller litters, higher mortality, and expression of genetic defects have a negative effect on the size of the population, and as the population gets smaller the rate of inbreeding goes up, resulting in a negative feedback loop that eventually drives a population to extinction.

But every dog has many mutations, and you have no way to know about them if a dog has only one copy and they are not expressed. If you breed two dogs with some of the same mutations, you can expect that the offspring will be homozygous for 25% of them. Many of these mutations might only have very slight effects that you wouldn't notice as a "disease", but it is the accumulation of these small effects that causes the loss of vigor and vitality in inbred animals that is called "inbreeding depression". DNA tests tell you only about one particular gene, a known risk. But if the COI of a litter is 25%, you can expect that 25% of the deleterious mutations in each puppy will be expressed.

To breed healthy animals, you need to worry about ALL of the potential risks, and the one thing we can be sure of is that there are many more recessive mutations than the ones we have DNA tests for. Why would you invest in the DNA tests available for your breed, then produce a litter in which 15%, or 25%, or 40% of the other mutations in every animal will be expressed?

You must remember that the coefficient of inbreeding is not a measure of health. It is a measure of RISK, and with or without DNA tests, it is the best way to judge the level of genetic risk you are taking when you breed a litter.

How many generations should I use to calculate the inbreeding coefficient?
If you want to know the risk of inheriting two copies of an allele (good or bad) from an ancestor, that ancestor must be included in your database. If you have a database with just parents and grandparents, the inbreeding coefficient can't tell you anything at all about how likely you are to inherit two copies of an allele from your great great grandfather. A coefficient of inbreeding from a five generation pedigree will be an estimate of the probability of inheriting two copies of the same allele from only the animals in those 5 generations that appear on both sides of the pedigree.

But the whole point of the coefficient of inbreeding was to give breeders a way to weigh the potential benefits and risks that would result from genes that are homozygous. So you need ALL of the ancestors of a dog to be in the pedigree database you use, and for purebred dogs this means a pedigree database that goes back to the first registered dogs in the breed - the founders.

The fewer generations used in calculating the inbreeding coefficient, the "better" (i.e. lower) it will appear to be. But this isn't an accurate assessment of the true degree of homozygosity in a dog, so it does not reflect the true level inbreeding depression and risk of genetic disease.

This graph shows how the COI calculated for five dogs in the same breed varies depending on the number of generations used in the calculations. You should use at least 8 or 10 generations, and 20 generations would be even better. For the most accurate estimate, of course, you should use the entire pedigree back to founders.

What if there are missing pedigree data?
A dog with one or two missing parents is disconnected from its ancestors, so "on paper" it can't inherit two copies of the same allele and its coefficient of inbreeding will be incorrectly calculated to be zero. Of course, that will underestimate the inbreeding estimates for all of that animal's descendants as well. One way to get around this is to create a "virtual" dog for the missing animal and assign to it the average level of inbreeding of dogs in the same generation.

Can I use the coefficient of inbreeding to reduce the risk of genetic disorders in my puppies?
Absolutely! This exactly what it was designed to do. Just remember that the COI is an estimate of the predicted loss of vigor and general health to expect as a consequence of the expression of recessive mutations. Except during the development of a new breed when you want to use inbreeding to fix type, you should strive to keep inbreeding below 10% to achieve modest benefit with modest risk.
Uh-oh. What if the level of inbreeding in my breed is already too high?
The closed gene pools mandated by kennel clubs for purebred dogs necessarily result in inbreeding, and in many breeds the average level of inbreeding is already high. This is the reason the occurrence of genetic disorders in purebred dogs is steadily increasing (you can watch the "genetic disorder counter" here) at the same time as lower fertility, smaller litters, and higher puppy mortality are making breeding ever more difficult.

Your first option is to make the best possible use of the genetic diversity that still exists in your breed. Identify lines that are not closely related to yours, and even if those animals wouldn't be your first pick in terms of type, a cross producing a lower COI will be beneficial in the next generation in terms of health. A ﻿genetic analysis ﻿of your breed's pedigree database can help you find these less related animals using something called cluster analysis. Don't assume that animals from different lines or even in different countries are less related. Calculate the inbreeding coefficient of a potential mating from a good pedigree database that goes back to founders. An "outcross" to a dog that is more related than you realize is likely to produce a litter with lots of nasty surprises.

What if your breed is so inbred that there is nowhere for you to go to find less related animals? Unfortunately, many breeds are facing with this problem. Genetic diversity is unavoidably lost from a breed every generation, and to restore diversity and reduce inbreeding you need a way to put the genes back by breeding to an unrelated dog, probably of a different breed. If your breed is already highly inbred and struggling with significant health issues, this is not a trivial thing to do. The animals to outcross to must be selected very carefully. For example, breeding to another highly inbred dog, even of a different breed, will produce offspring that all have the same alleles for the genes that were homozygous in the parent. The key to managing recessive mutations in any population is keeping them rare, so adding animals to the population that share many of the same mutations is asking for trouble down the road. Also, incorporating new genetic material into the breed will require a well-designed strategy worked out for at least the next 4 or 5 generations. A single crossbreeding followed by sequential backcrossing into the breed will remove most of the genetic diversity you were hoping to introduce. You definitely need to start with a carefully designed plan designed by geneticists with the tools to do it properly.

Avoiding high levels of inbreeding in the first place is much easier than trying to fix things after inbreeding becomes a problem. Breeders should work together to monitor the inbreeding of their breed so they can all benefit from healthier puppies that meet their goals as breeders now and in the future.